Not to be confused with “Bakadere”.

"Ahodere" is a term for a character who is oblivious to feelings of love.

The term originated on the internet, and is very popular on Japanese social media.

Ahodere characters are characters who are oblivious to other’s feelings. Regardless of how many hints they receive, or how obvious it is that someone is in love with them, they are simply unable to understand how their love interest feels until they outright say “I love you”.

Some ahodere characters may not even realize they are in love themselves. These characters may mistake signs of being in love as something else, such as their cheeks turning red as being a cold. When they do realize that they’re in love, they will be very surprised and may start to act differently around their love interest, usually in a very idiotic manner. 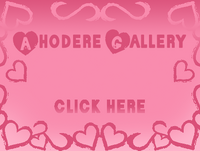