A "Bakadere" refers to a character who is or acts very clumsy and stupid. More often than not, they lack common sense.

Bakadere characters are, for the most part, very innocent and sweet, but their stupidity outshines their other attributes. They are basically a dim bulb, ditzy or klutzy girl or boy in love. They also tend to act like children who must be looked after and taught about life by others and love interest.

Most tend to be overly carefree and optimistic due to their lack of intelligence. Bakadere characters also act childish and air-headed. They usually rush into things without logically thinking them through first, resulting in embarrassing or disastrous situations.

However, some characters of this type are not really that stupid, they just act somewhat silly around others, even on purpose. In this case, these characters are usually seen as a more close example of deredere than bakadere, in fact, it's quite common for a bakadere character to also be deredere due to their innocence. Both types also tend to bring a smile to those around them, deredere intentionally and bakadere sometimes unintentionally.

Dojikko is a term for characters who are very clumsy.

Dojikko (ドジっ娘) comes from the words Doji (ドジ), meaning "clumsy," and Ko (っ娘), meaning "young girl." It can also be written as (ドジっ子), with (っ子) being a gender neutral term for “child” while being pronounced in the way as (っ娘).

Dojikko characters are typically female, but there are male characters who fit the trope as well. 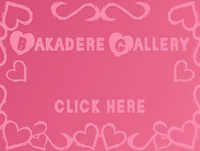