The Dere Types Wiki
Register
Don't have an account?
Sign In
Advertisement
in: Dere, Shy, Violent,
and 3 more

A "Bokodere" refers to a character who is typically shy around those they’re infatuated with. They get embarrassed easily and will lash out to hide their shyness and love feelings. They only know how to use their fists when flustered despite not really wanting to hurt their love interest.

As the plot progresses and with the help of their love interest, they will feel less flustered and will gain control over their aggressive impulses.

The term derives from "bokoru" (ボコる), meaning "to beat someone", and "deredere" (デレデレ) which means "lovey dovey".

The origin of this dere type is Mahiru Inami, from "Working!!". This dere type was created after her in Japan due to her reactions towards men and even her love interest in the manga and anime.

Inami suffers from severe androphobia (fear of men), which was built up by her father during her childhood. Due to her fear, she often punches immediately and with massive strength any men that tries to interact with her. Despite her androphobia, she is aware that men are not necessarily to be feared, and often struggles with her impulse to punch men she encounters.

She feels especially bad when hurting Souta Takanashi, her love interest, after getting extremely flustered over something he says or does, but he helps her get over her androphobia as their relation grows.

Bokodere characters don’t know how to handle their embarrassment and use their fists instead of their words. They are similar to the dere type tsundere in that aspect, the main difference is the lack of dialogue with a bokodere.

They are similar to a combination of tsundere and dandere. They usually behave like dandere or hajidere characters until someone makes them blush, which will make them respond aggressively like a tsundere. 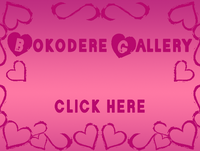