A "Byoukidere" refers to a character who is usually very sweet and kind but suffers from a physical disease, usually a fatal one.

Many byoukidere characters are confined to wheelchairs or need assistance getting around. They are often frail and weak physically. The disease causes the byoukidere to become feeble.

Many byoukidere types have a personality akin to Yamato Nadeshiko or "Oujodere". They are very kind, helpful, and sweet in nature. Usually, they are not aggressive when it comes to love, and tend to be shy and reserved in front of others. However, they can have any other personality trait or be any of the other dere types known.

They tend to have two fates: One is that they die, this is unfortunately the more common one. The other is that they get some miraculous cure, usually at the hands of the hero. In the case of the latter, they usually end up being the one chosen by the protagonist. 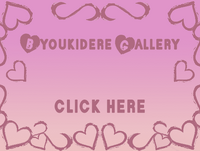