A "Darudere" refers to a character who is often very lazy and dull. [1] They will usually ignore others and do whatever they want unless someone they care about asks them to do something or needs their help.

A darudere is a character that is "sluggish," and always says things are too much trouble for them to do. If left alone, they'll just sit on their chair without doing anything at all. The "dere" part comes when they're asked to do something by their love interest. Then they say "Ugh, I don't want to, but fine, I'll go. I just need to go with you, right? Then you'll stop bothering me?".

Despite their massive complaints about having to do anything, they will lift a finger if it's for someone they like, although surely complaining during the whole process.

Darudere characters would rather sit around and show no emotion towards anyone, including their love interest. They are nonchalant to those whom they love, but they do express emotions, just usually show no interest in those who like them.

The darudere type is similar to nemuidere, as both like to sleep and relax. The difference between these two is that nemuidere characters are usually more kind than darudere ones and they tend to fall asleep suddenly and unintentionally or when there is nothing to do. They do not fall asleep necessarily by laziness, rather, they sleep because they enjoy or need it. It's also possible that a character can be both dere types, and that in addition to being lazy, they can be seen falling asleep often.

The darudere type might share some similarities with a hinedere, due to both being distant and uncaring to what others have to say to them. However, a hinedere will snap in rage if their intelligence is questioned or criticized, indicating that they think they are more smarter or better than others in privacy. A darudere will accept being criticized and continue trying to chill, as long as they are not forced to do things that are uninteresting to them.

The darudere type might share the majority of similarities with a kuudere, due to both being distant and uncaring to what others have to say to them. However, a darudere will be more in the sluggish side than the uncaring side, as they will help out others when really necessary. 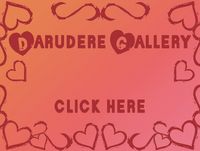