Deredere characters are usually very sweet and energetic. They are seen most of the time in a cheerful and happy mood and they tend to spread joyfulness to the ones around them. No matter what may happen, they quickly revert to their cheerful self.

This is the only character type that doesn’t have any abbreviation with the base "deredere" (デレデレ) word, which means that they are the perfect definition of "lovey-dovey". Some characters, even if the word means literally "lovey-dovey", can still show emotions or personality traits that don't match this completely all the time.

The deredere archetype differs from the other dere types by its usual acceptance if the love interest rejects them, since this dere type is purely lovey-dovey almost all the time. While they can be in love with someone, they are still able to develop their characters separate from them along a different path.

The biggest difference between other dere types is that deredere characters don't find it strange for someone else to be getting along with the person they love, as long as they’re not doing anything harmful to them. They're alright even if their love interest starts dating with someone else because that’s just how kind they are. As long as they are happy, the deredere won’t start up a huge fuss with whatever happens in the end. They’ll even be nice to their rivals and have fun in the process.

Deredere characters are unafraid to show their care and affection to the love interest. Although, when it comes to their love for them, they are either completely open about it or somewhat hesitant about sharing those feelings with them. They'll often willingly cuddle up with their love interest and hit on them.

A "Danredere" is a dandere who also has a deredere side.

Genki is a term for a character that is even more energetic than a typical deredere character.

Genki characters are very active and lively characters. They have an excess amount of inexhaustible energy that they showcase in almost everything they do. It's for this reason that a lot of genki characters are portrayed as fond of some kind of sport or sports in general.

If someone calls a person or character a "genki girl" or "genki guy", they are saying that the person has a lot of energy and endless enthusiasm.

It's hard to keep up with genki characters, but they will always try to share their fiery passion with others. All of their actions and words are filled with energy, making them the most optimistic member of the group.

A "Yeredere" is a cross between a deredere and yandere.

"Yeredere" characters are similar to yandere characters and deredere characters. They are characters obsessed with their love interest. They do not kill, but they do exaggerated things to show their affections, such as praying to them, cooking for them every day, giving lots of gifts and love letters, stalking, stealing their items, between others, similar to megadere.

While a yeredere can have multiple friends, they direct their kindness, affection, and love towards only a single person. 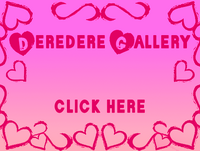