A "Dorodere", sometimes spelled "Doredere", refers to a character who acts or seems sweet on the outside but is actually full of bad feelings, like grudges, towards others or even their love interest. [1]

They will act behind the scenes, trying to crush the other party, sometimes including the love interest, who is likely to be an obstacle or distraction to the dorodere's objective. In front of others and even their considered enemies, the dorodere will act all lovey-dovey at first, hiding their true feelings of hatred. [2]

This dere type can be even more dangerous than yandere, yangire and yandegire, as more extreme examples of dorodere characters can eventually act exactly or similar to them, but they will also act with malicious intentions and hatred towards their own love interest, making it the most dangerous dere type there is.

The word is derived from the terms "dorodoro" (ドロドロ), meaning muddled or confused, and "deredere" (デレデレ), meaning "lovey dovey".

The origin of this dere type is Luca Trulyworth, from "Ar tonelico II: Melody of Metafalica". This dere type was created after her in Japan despite Luca being a milder example of the dere type as a whole.

In the beginning of the game, Luca is shown as a sweet and very kind girl who is in a loving relationship with the protagonist, Croix.

Later, when she discovers that her sister cannot be saved, she reveals with hatred that the relationship she had with Croix and her friendly and sweet personality was a farce to everyone in her team, and that she was only using the protagonist to save her sister and didn't really feel anything for him at all.

Once her real inner feeling created by resentments of the past are revealed, she stops pretending to be the kind and cheerful girl everyone thought she was, and even ignores the protagonist, the one who was supposed to be her boyfriend, deciding to take things into her own hands and even sometimes antagonizing the protagonists whether intentionally or not. Her hatred for the world and people in it even manifests itself in monsters created from her own feelings that the heroes need to defeat.

As the plot progresses, now with her true feelings and objective exposed, she begins to realize that she actually loves Croix despite using him all this time, which makes her start to get a destructive jealousy towards other characters, specially with Lady Cloche, now wanting Croix for herself alone and with a new goal in mind that now includes Croix by her side whether he wants it or not.

Dorodere characters, similar to yandere, appear to be sweet and lovable at first, but are actually really twisted or disturbed on the inside. Unlike most other dere types and similar to yandere, these will show their lovey-dovey side at first but later show their more aggressive side, rather than the other way around like most of these archetypes.

In the first type, this lovable side of them is a facade. They will act kind and friendly to everyone, while bottling up their real feelings. They will act as if they are in love with someone despite not really liking them. Dorodere characters hide the loathing they feel towards others, sometimes including their own love interest, and will slowly or unexpectedly show their violent side and true colors to their loved ones and people. They are very unpredictable and can strike at any moment.

They can also be characters who have an obsessive grudge towards their love interest, which can make them even more dangerous than a yandere, due to them acting on their grudge instead of their lovey-dovey feelings. They are full of bitter feelings, like grieving, and can become all crazy so that they get what they want. They will only act "dere" to gain something from the love interest or as part of their plan. They can even use their love interest and force their love interest to go to unimaginable lengths for them, even if it means dying for them.

The second type will feel a combination of hatred and love towards their love interest. How these contradictory feeling affect the dorodere can vary, sometimes hatred gaining more power than love and vice versa, but due to the hatred side, these feeling tend to become dangerous to the love interest and people around them.

Despite their apparent true contempt towards their love interest at first, they will gradually realize that they are really falling in love with the love interest. This not only will confuse others, but the own dorodere themself, which can sometimes lead to more dangerous reactions towards the love interest if the dorodere decides to deal with such feeling during their plan or even get rid of such romantic feelings to not distract them of their main goal.

Unlike sadodere, they will not necessarily enjoy hurting their love interest in a slow and painful way, instead, they will do it as quickly as they can, because they see it as the necessary thing to do. They will see their love interest only as an obstacle or a tool in their mission, and will eventually get crazy obsessed with them.

Sources with some extreme dorodere characters usually end in tragedy if the dorodere achieve what they wanted. They will only bring misfortune towards their "love interest" and those around them. All who opposed the dorodere in the past, possibly even love interest, will end up being killed or used by the dorodere, who will even make them believe that they are nothing without the dorodere.

In the West, however, possibly due to a translation error or misinterpretation, dorodere has gained popularity with a completely different meaning from the original meaning in Japanese.

While the meaning in Japanese shows that an extreme version of dorodere can be even more dangerous than yandere, the opposite has been believed for a long time in the West. They think that dorodere characters are a non-dangerous version of yandere, with disturbed thoughts, but without acting on them. They think that all dorodere characters are actually really sweet, despite their abnormal behavior and thoughts.

Even if more mild examples of Japanese dorodere characters are similar to the interpretation of westerners, it was believed that for a character to be considered dorodere, they should never act on these thoughts and inside feelings. However, in actual manga and anime, it's very possible for a dorodere to act on their negative impulses, even if they hide this side of them in front of others at first with a sweet exterior.

It's possible that during the translation, the part that describes dorodere as a "Variation of yandere who keeps their muddy feelings inside." was interpreted literally. Even if this part is true, it wasn't considered that dorodere characters will really act on these thoughts behind the scenes and, in time, even in front of others and their love interest once those feelings have been uncovered.

To know more about the Western meaning, go to Unofficial Dere Types#Dorodere (Western). 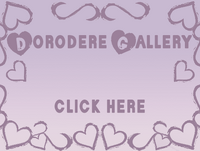