The Dere Types Wiki
Register
Don't have an account?
Sign In
Advertisement
in: Dere, Arrogant, Kind,
and 2 more

Goudere characters will stop at nothing to obtain whatever they think or want their master to have. They are unstoppable forces that do whatever they please for their special someone, out of their love for them.

The goudere have an idealized notion of their loved one, believing that they deserve the world or that they should be treated as gods, even if the love interest explains to the goudere that this is not necessary at all.

Due to their insane devotion to them, they will go to unimaginable lengths to give to their love interest what they believe is the best for them creating uncomfortable and comical situations that even can put the love interest in trouble.

"Gou" can also be from Gouki (剛毅), meaning "fortitude", or Gou Oni (豪鬼), meaning "Strong Demon". This combination of "gouki" and "dere" could be translated as "lord lover", as goudere characters will consider and treat their master as a strong demon lord.

This can also refer to the own goudere, and be a reference to how they are usually characters with an advantage in power or with a tough attitude that they normally use in favor of their love interest, similar to a strong demon in love.

The story is about a student who manages to bring his fictional crush, Sora Nagihara, into the real world. She immediately sees the protagonist as a god because of this and as someone who must rule the world.

When the protagonist mentions how bad he is with women, Sora automatically decides to create a harem just for him despite the other's protests. Due to Sora's questionable and extreme methods, the protagonist, who is not okay with what Sora is trying to do, always gets into trouble and is comically blamed for everything Sora does, despite not being the one who really starts any of these uncomfortable and even illegal situations.

Goudere characters are excitable overachievers that will try to get all they think their loved one wants or deserves; even forcing everyone who crosses their path to give or contribute to what the goudere believes is the perfection and happiness for their master.

Without the other saying anything or misinterpreting an innocent comment, they will decide on their own what their crush would appreciate to have in their lives. Normally, they will go to extreme cases and transform something simple into a monumentous goal. For example, their love interest wanting some candy drives them to buy or steal the entire candy shop, or even stealing all the candy they find in their path, regardless of whether the love interest really wants that -- which they usually don't.

The goudere does not necessarily take the wishes of their special someone into account, rather, they decides for the love interest what they want. This makes for sometimes awkward and uncomfortable situations. Even if their master tries to convince the goudere not to do it, they will probably do it anyway.

They are usually portrayed as characters with a strong and tough personality. They have great confidence in their beliefs and in their own advantage in power and strength, which can be supernatural. They will use said abilities to please and help their master. They can also be overprotective towards their love interest, taking control of the situation most of the time.

Due to their loyalty to their love interest, to the point that they may view them as worthy of being treated like gods, goudere can be seen as the counterpart and compatibility of "Kamidere".

They are seen as a cross between a yandere and a tsundere, due to their arrogant and tough attitude, like a tsundere, that they will use to achieve the best for their love interest regardless of the consequences of their actions, like a yandere. They are also really similar to a mix of suuhai-gata (Worship) yandere and kanchigai-gata (Wrong idea) / mousou-gata (Delusion) yandere types.

The difference between these dere types above with goudere is mostly the reason and motivation for them to do this. Goudere characters don't usually let their romantic emotions cloud their objective judgement -- although their obsession with their master certainly will. The goudere genuinely appreciate their notion of their love interest, and will try to achieve all this for them. They typically don't even want the same in return and don't do this for their own gain. 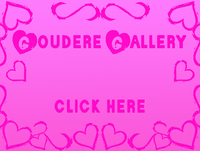