"Gundere", also known as "Gandere", is a term for a character who expresses their love with or towards guns.

The term was created at first on Japanese social media as a tsundere variation because of Misato Tachibana, from Nichijou.

With time, this dere type evolved for characters who also express their love feelings using guns in other ways, or even simply for characters obsessed with guns and anything related to them. This new gundere type became popular in Japan mostly with the character Graham Aker, from Mobile Suit Gundam 00, because of his obsession with the mobile suits called Gundams. [1]

Gundere is a term used for characters who are either obsessed with guns and firearms in general, or those who show their love and feelings through guns. However, the firearm used is not limited to a gun. A character directly associated with a gun could be called a gundere too. Their obsession or connection with firearms will be applied to their love life, affecting it or influencing it in some way. [2]

Gundere characters can be similar to tsundere and bokodere characters, but with more extreme reactions, using guns instead of their words or fists. They always carry a gun with them, pulling it out when they become embarrassed by their love interest, this is usually followed by them firing said guns while blushing to hide their feelings.

A gundere derived from the tsundere trope only becomes violent because of a knee-jerk reaction, sometimes unconsciously, to hide their emotions. Even if they fire their gun, they usually do not actually harm anyone with it. Misato Tachibana is this type of gundere, being also the true origin of the dere type.

Gundere characters will also protect their loved ones, or seek vengeance for their loved ones, using some time of firearm. Graham Aker is this type. They will be determined to accomplish this task, sometimes getting obsessed with their mission and even with the weapons used during this time, blinded by their feelings.

Some gundere characters will displaying their superiority and skills with guns in front of their love interest to impress them. The gundere could also become mesmerized and even fall in love with someone showing great knowledge or mastery with firearms.

A person who simply shows a great affection for guns also counts as gundere. They are characters who are overly excited about any kind of firearm and have a great love for them. They could even have favorite ones in their possession, and from time to time they will rub their gun on their cheek, give them names, talk to them and treat them with love and care, like if they were another person, and in extreme cases, even lover. [3] 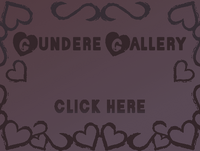