A "Hajidere" refers to a character who is really nervous and embarrassed around their crush. Their shyness either only appears when they are around or interacting with their love interest or intensifies even more around them if the hajidere is normally shy.

This word is a compound of "haji" (), which means embarrassment, and "deredere" (デレデレ), meaning "lovey dovey".

Even if hajidere characters will avoid being in close proximity with their crush and to keep their conversation very short by saying "hi" to them every time they see their crush, distancing themselves away from them, and telling them politely to leave, they will spy on their crush from afar without their crush looking at them.

The difference between a hajidere and a bokodere is that hajidere characters can get really nervous and will try to hide from their love interest when embarrassed, while bokodere characters will become more aggressive or enraged when someone makes them blush, similar to tsundere characters. 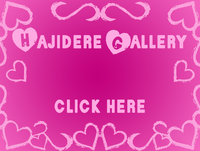