A "Himedere" refers to a character who wishes to be treated like a princess or a queen by the person she loves, even if she is not actual royalty.

Himedere characters have a princess complex. They can be real princesses or only want to be treated like royalty.

This is the female equivalent of oujidere.

Himedere [1] characters demand to be treated like royalty by their loved ones, they can really be princesses or only think that they are in a higher position to others. Consequently, they should be treated as such and admired by those they think are inferior to them.

They usually get any kind of work done by having other people do it. They give orders to everyone around them. They put themselves first in any situation, not caring about others. The only exception is the one they love, although they may hide their love for their love interest at first. They always want perfection and success everywhere, from everyone and from themselves.

A himedere may have a history that shows the root of their insecurities. Specific moments of abandonment, neglect, and betrayal have commonly been the cause for the himedere's behavior. The purpose of a himedere's backstory is to explain what triggered their power-seeking behavior, and who in their life is sympathetic to their past.

A himedere can be truly befriended by the few who can see past their ego. Sometimes, the himedere takes their companions for granted and chooses to treat them unfairly. Those who tolerate her either let the himedere walk all over them or retaliate eventually, but there is usually a sense of loyalty or a strong bond that is difficult to break.

This type of character is one who has traits of a stereotypical, snooty princess, and comes off at first as arrogant, self-centered, and vain. Still, they have the capacity for love and friendship and often will soften over time, learning a valuable lesson in the process.

They are very really similar to a hinedere when it comes to fighting for power and status. The difference of this dere type with hinedere is that himedere is a big attention-seekers and a loudmouths when it comes to being praised by many people around them in a large crowd. As for a hinedere, they will only get attention from a few people in a small social circle behind close doors.

A himedere character's behavior is like a spoiled brat, but with a princess complex. The kinder and more mature version of this dere is oujodere, who act like gentle, kind, princesses and only insist others to treat them differently in fulfillment of their responsibilities. 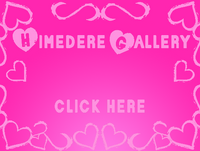