Not to be confused with "Tsundere" or "Kuudere".

A "Hinedere", also known as "Hinodere" in some media, refers to characters who have cynical world views, are cold-hearted, and are highly arrogant. They will get easily annoyed by other people, included the love interest at first.

Hinedere characters, despite their exasperate and arrogant personality, have a soft side deep down that may reveal itself once their love interest breaks through. [1]

They are really similar to an oujidere, himedere and kamidere when it comes to fighting for power and status. The difference of these dere types with hinedere is that oujidere, himedere, and kamidere characters are big attention-seekers and a loudmouths when it comes to being praised by many people around them in a large crowd. As for a hinedere, they will only get attention from a few people in a small social circle behind close doors.

A hinedere will turn hostile and annoyed towards a few people around them because of their ego, mostly when they are acknowledged and trusted by those who are closest to them. When other people call out a hinedere for their behavior or turn out to be a burden for the hinedere, they will be given the silent treatment and they will get cut off entirely by the hinedere.

There are some similarities between a hinedere and a kuudere when it comes to both dere types being quiet, not liking large crowds and being distant from others. However, unlike a kuudere who has a hard time showing feelings to others due to their emotionless state, a hinedere shows much more emotions than a kuudere, although usually the more arrogant and fed up ones. 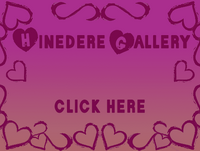