A "Hiyakasudere", also known as "Teasedere" (ティーズデレ) in some media, refers to a character who likes to tease others and sometimes flirt with those they like.

They will act really seductive in front of other people, mainly those that attract their attention, and will tease those that get embarrassed easily by their actions and words, possibly the love interest.

The word is a compound of the term "hiyakasu" (ひやかす), meaning "to banter", "tease" or "make fun of", and "deredere" (デレデレ), which means "lovey dovey".

Hiyakasudere characters, also known as Teasedere (ティーズデレ) in some media, are sarcastic, mischievous or at least playful at heart, and sort of like a flirt as they tease people they like. Inside, however, some of them who are just only super seductive care a lot for their love interest, and tease them even more.

Hiyakasudere is often an extension of tsundere. The majority of the hiyakasudere characters can be also a bit tsundere, although they will not be the harsh or angry type; rather, they will be more like the deredere type.

They are also really similar to oujidere and himedere when it comes to fighting for attention. The difference of these dere types with hiyakasudere is that both dere types, having a royalty complex, will want to be praised by other people around them, so that they feel superior. Hiyakasudere characters will praise others and try to seduce people instead with their attractiveness and charm to win their hearts. They will frequently tease their love interest from time-to-time. Oujidere or himedere characters don't see it necessary to flirt with other people, because it's beneath them, as they see themselves as perfect and that they deserve the attention. They are also very picky (or at least they make it seem so), when they must choose a love interest, while a hiyakasudere usually go after anyone who catches their attention.

Hiyakasudere is also much like sadodere, who like to toy around with their love interest like a hiyakasudere does. However, a hiyakasudere does not manipulate or wants to cause tremendous pain. They only do and say things to playfully infuriate the person they like or leave them flustered. They are not sadistic as a sadodere is. 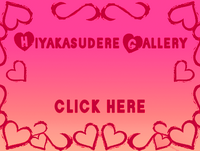