A "Kanedere" refers to a character who is attracted to others with money or status.

Kanedere characters are the anime and manga equivalent of a gold digger. They often just care about how much money a person has, and nothing else. However, if they truly love someone the habit can be broken.

Kanedere characters use people for money and only like and treat people well that have earned wealth and status. They only show affection and care for people that have or can provide some money and fame to them.

They will ignore or treat someone with loathing until they find out that this person can be a source of profit and they can get something out of them. However, if their "kane" side breaks down over time, they will realize that money is not the most important thing and they will begin to appreciate people more for who they really are. 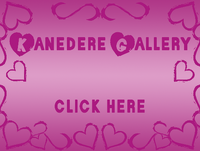