Not to be confused with "Megadere" or "Yandere".

A "Kekkondere" refers to a character obsessed with marriage or who wants to get married right away, even with someone they just met.

This word is a compound of "kekkon" (), which means "marriage" and "deredere" (デレデレ), meaning "lovey dovey".

Kekkondere characters decide immediately or almost immediately when they meet a person that they're the ultimate person for them. Then they start planning their marriage, even if the other person does not agree with this at first.

They want their love interest to get married to them right away. They will often go to absurd lengths to get their love interest to want them. This usually makes their crush reject them initially because of how persistent and creepy they can sometimes be. In extreme cases, the kekkondere can even try to force someone to marry them.

The reason why they do this can vary. Maybe they become so obsessed with a particular person that they want to get married with them without thinking about it and sometimes even without hearing what their love interest desires via establishing boundaries.

It's also possible that some kekkondere characters are obsessed with the idea of marriage. Or, they may have a fear of being alone for the rest of their life that motivates them to chose -- and chose right now. Or, it could be that they can easily "fall in love," and are really stubborn about their choice. They then go after the best candidate to be their perfect spouse, even if the love interest is not. 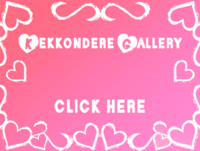