Kichidere is a character that is crazy and dangerous but their feelings of love, and reactions to them, are surprisingly normal.

Kichigai is usually translated as “crazy,” but is much more offensive in Japanese, so much so that it would be considered discriminatory against people with mental illness.

The use of this word makes this dere type little used and mentioned in Japanese literature and anime due to the offensive meaning.

They are characters that will show two completely different sides, their usual crazy and demented side towards others, and their pure and sweet side towards their loved ones.

This dere type seems to be similar to yandere, but they are actually not the same. While a yandere will turn crazy after falling in love, and because of it, a kichidere will be crazy from the beginning and won't show their crazy side when it comes to love. They act surprisingly normal in any kind of relationship. They won't hide this darker side of themselves, they can't help it, but this part of them won't get in the way of their relationship with their love interest.

Unlike mayadere, they will not turn to a morally outstanding character after experiencing love. Instead, they will continue to behave insanely towards other characters. Kichidere characters will show their affection differently than how they normally behave, but love won't change their core lunatic personality.

They are compared to demons or cruel monsters that are in a normal and loving relationship or would want to be in one. 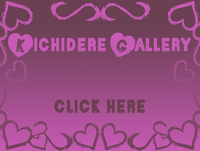