"Although she seems to lack emotion, this is largely a pretense."

Kuudere is a stock love interest who is calm and collected on the outside and never panics. They show little emotion, and in extreme cases are completely emotionless, but they may be hiding their true feelings deep down.

A Kuudere (クーデレ), sometimes written as Kūdere or just Kudere, refers to a character who is often cold, blunt, and cynical. They may seem very emotionless and stoic on the outside, but on the inside they’re very caring, at least when it comes to the ones they love.

Kuudere is the last well-known main dere, the kuuderes, are those characters that look expressionless, won't react to whatever the love interest says, doesn't get jokes, and are most likely regarded as some sort of genius of high IQ. These characters are usually designed with hair colors of white, blue, or other cold colors.

The point of kuudere is that though they're introduced as something like moving ice statues, as they develop their relationship for the other person, they start opening up and even showing expressions like smiling slightly over time.

In some cases, a kuudere will completely melt or break their ice armor, start crying or screaming "I love you". This is when a kuudere goes from kuu mode to dere mode. It's one of the possible developments when you have a kuudere archetype.

Allegorically speaking, a kuudere is like snow: it may be cold and harsh at first glance but it is also what keeps autumn's seeds warm and safe until spring.

Similarly, while perhaps appearing apathetic and awfully pragmatic, it is but a frosty mask that protects tender, delicate feelings deep underneath the facade, waiting for someone to melt the snow and allow them to blossom.

Kuuderes often speak in a calm monotone and seem unaffected by the world around them. They never seem to be overly happy, excited, or surprised, just as they never appear sad, annoyed, or angry. Extreme examples may even seem to be completely emotionless like robots. It is used to describe characters who always remain calm and composed. Though they act serious on the outside, they often have a very good, sarcastic sense of humour.

They tend to deeply care and love someone and they have a good personality when you know them, but are afraid to show it too often because they view it as a weakness. Either because of who they are, or because of the situation they are in. More often than not, they come off as emotionless, acting very cold, blunt and cynical.

They also tend to be leaders who are always in charge of a situation due to their calm, clear-headed. and respectable attitude even in tricky situations. Sometimes, kuuderes are the class presidents that keep their schools running. Other times they take the form of stoic, professional assistants to superiors that they love and respect.

While kuuderes remain strict and business-like, they are emotional underneath their self-control. However, they tend to fear showing any weakness such as admitting liking someone or coming to rely on someone emotionally as well as professionally. Some are unclear as to how to even express their emotions, and, in extreme cases, are unsure what feelings actually mean.

Due to the way a kuudere acts, a Yandere or Yangire can easily pretend to be a kuudere when not acting insane.

They can also be mistaken with Tsunderes due to how kuuderes can sometimes reply to others without thinking about how the other person would feel, mainly Tsundra characters. The difference is how kuuderes will respond to everything unemotionally and may insult nonchalantly without realizing how this can hurt other people, while tsunderes will be more aggressive and start insulting because they feel embarrassed, sometimes knowing very well that this can hurt others.

The difference between a Kuudere and a Dandere is that dandere characters don't talk with people due to their shyness, while kuuderes chose willingly to not talk, only doing so when necessary and even then they will speak with perfect tranquillity. Danderes are nervous and embarrassed with others, contrary to kuuderes, who don't show emotions and can control their feelings.

The difference between a Kuudere and a Hinedere is that kuuderes don't care about some things, making them look expressionless in a lot of situations, while hinederes show a similar expression due to annoyance. Hinederes will snap easily at people if they begin to irritate them, while kuuderes will remain calm (cool).

The kuu in kuudere クー comes from the word kuuru クール, which is the katakanization of the English word "cool."

In Japanese, kuuru can mean a lot of things. It can mean that someone looks chill, calm or even cold, or exterminator-like badass whenever something happens, or even impressive, like it does in English.

In the case of kuuderes, the kuuru would be the the composed, calm type. The type that doesn't show emotions and stays calm and collected (cool) no matter what.

Sometimes you may see kūdere instead of kuudere. This is just the same word written with different romaji, Neither are wrong.

Type 1 — Always In Control: Comes off as "kuu-" (cool) because of emotional control, maintaining a calm, collected exterior. Expressions are subtle, with watery eyes being akin to bawling, and a small smile being akin to a giggle fit. Feelings may be filtered through snark or dry wit. The appeal is their bluntness and directness, in contrast to shy reserve or boisterous rowdiness.

If playing a Love Interest, either the other partner will be the source of "Will They or Won't They?", or they'll skip that and the focus will be on the drama that comes after they admit "They Do". Occasionally this is a trait of a more exaggerated character, the "Emotionless Girl/Boy".

Type 2 — Once You Get To Know Them: They will show the 'dere' side, but strangers and those who they don't trust will see the 'kuu' side. Friends all consider them to be caring. In private moments with them, you may just catch them laughing. Although it will still be considered unusual.

It's not that they spare friends any of the "Deadpan Snarker" wit or that they don't act 'kuu' with them sometimes. The friends just understand it better than those that aren't close.

Type 3 — Mood-Swinger: Alternating between 'kuu-' and 'dere' persona depending on mood. What controls the mood? Some may have clearly defined "Berserk Buttons". Companions might learn how to manipulate this to their advantage. Others might switch moods at what seems to be random moments, which can be very unnerving or confusing to those nearby.

Some might contend that this version isn't 'kuu-' (cool) enough to qualify as a kuudere, and might place them in some other category.

Obviously these variations aren't always used pure, and often are mixed together in different characters. Using Raven from Teen Titans as an example, while she fits the first variation best, she certainly has elements of the other two.

A Coodere refers to a character who is very similar to a Kuudere, but instead turns lovestruck.

The “coo” in coodere comes from a more English like version the Japanese pronunciation of the English word “cold” (courudo, コールド), and "deredere" (デレデレ), which means "lovey dovey".

Cooderes may not seem like they care about anything, but they actually do. They start cold, distant, uninterested, and don't pay any attention to potential love interests, but eventually turn lovestruck for someone.

Unlike a kuudere, cooderes don't get hostile with other characters, and instead, they ignore them. Cooderes develop feelings, while kuuderes have them all along but keep them hidden.

A combination of Kuudere and Tsundere.

The word is a compound of "tsun tsun" (ツンツン), meaning to turn away in disgust and "kuudere" which is a combination of cool (クール) and "deredere" (デレデレ), which means "lovey dovey".

Kuutsunderes [1] are a type of dere that are basically a cross between a Kuudere and Tsundere. There are 2 main types of kuutsunderes, the Temperamental type and the Apathetic type.

kuutsundere, unlike tsundere, do not hide their feelings behind a mask of sarcasm, but express their true feelings. In addition, they do not have such sharp mood swings as tsunderes.

The Temperamental type of kuutsundere, which, like the name suggests, is temperamental by nature, can sometimes stay calm, cool, level headed individuals, or at least appear that way. Other times they are hothead individuals. They may also take a while to warm up to their crush or a potential love interest.

The Apathetic type are more apathetic, abstracted, and often show little to no emotions or are not very emotional. They also seem very sarcastic and rude, similar to Kitikudere at times.

During the development of the plot, they may not reveal their dere-sides at all, since they typically have their characters fleshed out later.

A Kuugire [2] is a subtype of Kuudere. They are characters which, under further development, reveal a more brutal and violent side instead of the typical loving and caring side. However, such characters in some cases may show a dere-side, but it is not the leading one in their case.

The “kuu” in kuudere comes from the Japanese pronunciation of the English word “cool” (クール), and thus, is used for a person who is calm and composed on the outside, and "gire" (ギレ) that means "to be mad (at someone)".

Kuugires may have sadistic personality traits and a passion for destruction, or treat people with contempt and without any sympathy, but they act aloof, cold, calculating, not showing their emotions and their attitude about what is happening around them.

Unlike Yanderes, kuugires differ in the absence of mental disorders and sudden mood swings (which is a sign of "bipolar disorder"). Kuugires are almost always antagonists and/or negative characters.

Please note: Characters who kill against their will and feel compassion for their victims are not kuugires.

The suffix gire ギレ is sometimes added to these personality words instead of dere (デレ). Its meaning in words such as tsungire and yangire is that of "snapping" or "being mad" instead of dere's "being in love."

The word gire comes from the verb kireru (キレる), which means "to snap" or "to be mad (at someone or something)." Basically, to lose your patience, to be done with it, to have had the last drop, to burst with anger, to be beyond the end of your rope. That's what kireru means.

The gire versions of personalities often have nothing to do with love or romance at all. People often attribute ~gire as more violent versions of ~dere, but these two words aren't actually related. A character deemed ~gire doesn't even need to be in a romance or anything. They just lean towards aggressive, abusive or violent behavior.

The part of the word kireru that becomes the suffix is kire, but it becomes gire instead because of a process called rendaku that changes the pronunciation of suffixes. 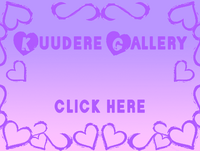 Retrieved from "https://the-dere-types.fandom.com/wiki/Kuudere?oldid=28122"
Community content is available under CC-BY-SA unless otherwise noted.