"Masodere" is a term for a character who likes being hurt and humiliated.

They are the counterpart and compatibility of sadodere.

The term was created on the internet to pair with sadodere, a character who has sadistic tendencies.

Masodere characters would want their love interest to abuse them mentally or physically, especially enjoying pain inflicted from someone they admire.

Masodere is similar to "Utsudere", since some utsudere characters self-harm. Some masodere characters’ attraction towards pain may come from a place of self-loathing, but for most, they enjoy it simply because it makes them feel good. 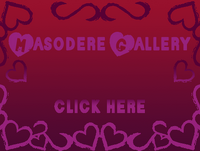