A "Mayadere" refers to a character who is often a dangerous antagonist of a series but switches sides after falling in love or after becoming fond of another character, usually the protagonist or someone in the hero's team.

They are characters that, at first, are seen as the bad guys or even the main villain. They want to screw up the plans of the heroes or even kill the protagonist in the story. As time goes by, they will become friends with the hero's team and in some cases fall in love with someone on the hero's team. Mayadere characters can still hold some grudges toward some of the main characters or still act like villains after this, while others can also turn completely good.

Maybe they want to join the hero team at some point or are being forced to do so, perhaps to defeat a stronger common enemy or get out of some situation, but this is usually just temporary. However, during this time, the mayadere can become attached to those on the good side. So in the future, they will be less harsh with them when returning to their antagonistic role, or at least with the person they have fallen in love with.

As most of them can be the main villain of the story, if they get to join the hero's side, another major villain will appear in the story. However, the most common thing to happen is for the mayadere to return to their position as main antagonist in future episodes after the problem is solved. If so, the character can still remain deadly and unpredictable for the protagonist or other main characters during the story. Alternatively, with time, they can also start to fake their fights to not really hurt the heroes when their dere side starts to act up. They may even do some small acts of compassion or other things to benefit the hero's team.

If they help the protagonists, they can also start to say things or act like tsundere characters, especially if the situation has forced them onto the hero's team. During the mission. they will comment from time to time that "This doesn't mean that we are friends now," and that "You should be grateful that I've decided to help you". They can also insult and make fun of the heroes even if they are working with them now. Normally, if the heroes are the only ones that need help from the mayadere, the mayadere will only agree if the person they like in the group asks them personally, or is in real danger.

If they really join the hero's team, they will begin to reveal or show personalities that the heroes couldn't see when the mayadere was an enemy. They may show new ways of thinking and act more morally after the good guys teach them other ways of seeing things and acting. 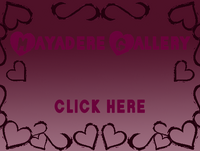