Not to be confused with "Darudere".

A "Nemuidere" refers to a character that spends much of their time sleeping, intentionally or unintentionally.

They enjoy their sleeping time, and will try to get as much sleep as they can.

This dere is often mistaken with darudere, but while the word "nemui" means "sleepy", "daru" means "sluggish", which makes nemuidere and darudere completely different.

Nemuidere characters tend to be very lazy and laconic in nature, as well as intelligent and artistic if only they weren't such a sleepy head. Unlike the darudere, they sleep a lot more and sometimes show interest in the one that they love.

Even though darudere is lazy or sluggish, it doesn't mean that they sleep all the time, they are seen awake in a lot of screen moments; they are just lazy. While on the other hand, nemuidere characters can be found asleep in a lot of scenes but it doesn't mean that they're lazy, they just love and enjoy their sleeping time. Although, it's also possible that a character can have both dere types.

They enjoy sleeping and are not necessarily lazy, as some nemuidere characters can fall asleep by accident or when there is nothing to do. Even though it's rare, when they are awake they get their things done and can possibly be diligent.

The hero often has to motivate them through their love of the hero to become less sleepy. 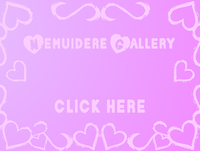