Not to be confused with "Inudere".

A "Nyandere" is a dere type that is cat-related or is very obsessed with them, to the point where they act like them sometimes or all the time when their "dere" side appears.

The word nyandere (ニャンデレ) is a compound of "nyan" (ニャン), which is a Japanese onomatopoeia for a cat sound, and "deredere" (デレデレ), which means "lovey dovey". In other words, nyan in Japanese means "meow", the sound cats make.

Nyandere [1] characters tend to add “nyan” in their sentences. They might even be nekojin, which is part-cat and part-human. When they are expressing love, they might say “nya~” to show their loving feelings. 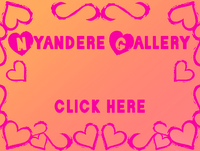