Not to be confused with "Kamidere".

Onidere refers to a character with a demon/devil complex. They will treat others included their love interest badly and like scum in front of other people, but will turn lovey-dovey after a while and when others are not looking. [1]

They are usually even more dangerous and cruel than kamidere characters, and will hide their love life and relationship from everyone else at first. [2]

This word is a compound of "oni" (オニ) and "deredere" (デレデレ), which means "lovey dovey".

In Japanese folklore, Oni is a type of demonic creature, often of giant size, great strength, and fearful appearance. Oni are considered the Japanese equivalent of demons and other demoniac creatures.

The word was first mentioned in the same title of the romantic comedy manga "Onidere (オニデレ)", from 2008.

In this manga, Saya Ikushima is in a secret love relationship with the protagonist, despite being known as one of the biggest delinquents of the school. She even possesses superhuman strength and two demon-like horns, which gives her the name of "Demon Head" by others.

Due to her position and reputation, every time they are outside, she treats her love interest with disgust, she hates being seen with her love interest despite loving him, and she hides their relationship from everyone else, to keep the impression on her gang that she is the strongest and biggest man hater of them all. Even stating that if they are found out about their secret love, she will kill him and then herself.

However, when Saya is alone with the protagonist, she acts really sweet with him, and she usually asks to be punished, in return for harming him earlier to keep up her image.

She loves him a lot, despite how she treats him during the day in front of others, and only treats him bad, due to her "devilish" reputation and to hide her more lovely side from people.

They believe that they are a powerful demon or a being of darkness. They feel that they are in a higher position compared to others, similar to a kamidere, but usually set to extreme, with megalomania, psychopathy, and maniac actions and thoughts, which can makes it even more dangerous than kamidere.

Some onidere characters can act like this because they feel that they need to be cruel and seem strong in the position that they are in, but they will eventually show their more "dere" side when their "oni" exterior is broken by someone with a good heart that accepts them as who they really are.

Due to their position, they will hide and sometimes deny their love feeling, as they think they have a reputation to uphold and that a "demon" should not display love. But behind the scenes and when no one is looking, they will show more their "dere" side to the love interest. [3]

Characters that are sweet but are demons, have demon-like traits or complexes can also be considered onidere, where the "dere" side is more prominent than their "oni" side.

This dere type can seem similar to dorodere or sadodere, but instead of having grudges on someone or liking inflicting pain to loved ones, violent onidere characters are usually cruel with everyone due to their diabolical nature. 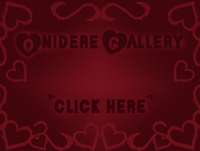