An "Oujidere", sometimes spelled "Ōjidere", refers to a character who wants to be treated like a prince or a king by the person he loves, even if he is not actual royalty.

Oujidere characters have a prince complex. They can be real arrogant princes or only want to be treated like royalty.

This is the male equivalent of himedere.

Oujidere [1] characters, much like their female counterpart called himedere, demand to be treated like royalty by people, including loved ones. This doesn't always mean that they are really royalty. It's possible that they simply lord themselves over others, who the oujidere will demand to treat him like a prince.

They usually get any kind of work to be done by other people, giving orders to everyone around them. They put themselves first in any situation, not caring about others, except the one they love, even if they may hide it at first. They always want perfection and success everywhere, from everyone and themselves.

They are very really similar to a hinedere when it comes to fighting for power and status. The difference of this dere type with hinedere is that oujidere is a big attention-seekers and a loudmouths when it comes to being praised by many people around them in a large crowd. As for a hinedere, they will only get attention from a few people in a small social circle behind close doors.

Lastly, they are kind of related to a hiyakasudere, because an oujidere and hiyakasudere both can fight for attention in their rivalry with other characters. The difference of this dere types with a hiyakasudere is that an oujidere will want to be praised by other people around them, so that they feel superior. On the other hand, a hiyakasudere will praise others and try to seduce people by using their attractiveness and charm to win their hearts. They will frequently tease their love interest from time-to-time. An oujidere doesn't see it necessary to flirt with other people, because it's below them. They see themselves as perfect and that they deserve the attention. They are also very picky (or at least they make it seem so), when they must choose a love interest, while a hiyakasudere usually go after anyone who catches their attention. 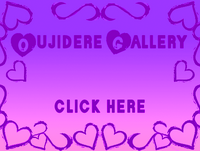