"Shindere" is a term for a character who died and became a ghost. They may have also been revived, but with supernatural powers or drawbacks.

The first use of the term "shindere" was in the manga "Ushiro no Shindere-san" (うしろノしんでれさん), published in 2010. In the manga, Miki is a ghost who wants to become human again. She decided to play a shinigami's game where she must get the person she likes to return her feelings before an hourglass pendant she wears runs out of time, or she and that person will be sent to hell. The protagonist is the only person who is able to see her in the beginning, and she falls for him after he saves her from being hit by a truck.

Later on in the manga, he encounters another ghost who is the double of a living girl, Kozonoi Kurotama and Kozonoi Shirotama, respectively. Kurotama appeared when Shirotama had a near-death experience because of her illness, which seemed to grant Shirotama another chance at life. Kurotama also falls for the protagonist. This series was put on hiatus over 10 years ago, so it's unlikely to reach a conclusion.

Another, more popular manga that was published around the same time used the term "shindere", called "Shindere Shoujo to Kodoku na Shinigami" (シンデレ少女と孤独な死神). In this series, Wakanae Akira gets a transfer student in her class who claims to be a shinigami, and warns everyone to stay away from him, or they will die. However, the two of them end up becoming the class presidents, so they are forced to interact. At first, she doesn't like him, since he threatened her friend, but she feels sorry for him after she hears of the people who have died in front of him.

They both go to a shrine to get some food, and after an altercation, the boy accidently pushes her off the railing, killing her. Her ghost stays around for a moment in the physical world and she sees him despair over her death, blaming himself because he developed a crush on her. She is taken to the god of the island, who gives her a choice: she can die, or she may be revived, but her soul will shatter if she ever leaves the island, since the god's powers cannot extend past the island's radius. She chooses to come back to life, inhabiting her body once more. In the next chapter, she is killed again, but learns that the god is able to revive her as many times as she wishes, basically making her immortal.

There are two kinds of shindere characters: those who died and were reanimated as a ghost, and those who were brought back to life with ties to the supernatural.

Shindere characters who are ghosts usually cannot be seen by most people, thus living very lonely lives. When they find someone who can see them, they will follow that person around, since they want the company.

These types of shindere may not remember their life as a human. They can also either become human again by the end of the story, or, more commonly, ascend to the afterlife.

Shindere characters who have been brought back to life but still have some ties to the supernatural. This can manifest in many ways, such as the ability to see ghosts and other supernatural beings, immortality, or powers related to spirits. These powers usually come with drawbacks, such as being unable to certain things or having to stay in a certain area, since they did cross the barrier of life and death.

These characters' personalities can be a more wide range of things, as are their reactions to love. However, these characters usually fall for someone who knows of their power and past, of which the shindere told them after getting really close to that other person.

This dere type does not apply to those who died and were sent to another world, since they did not return to their own life, rather, they started a new one. 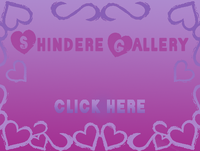