An "Undere" refers to a character who says "yes" or "I agree" to almost everything the one they love says and follows everything they are told to do. They are really dependent on their love interest, and would not know what to do without them.

Undere characters agree as much as possible to become as close as they can to their love interest out of fear of being abandoned. It's even possible that they would fear that they would become unable to take care of themselves independently.

They do pretty much whatever their love wants. This always leaves them open for voluntary manipulation, due to not thinking about the negative consequences of always saying “un, un, un” (yes, yes, yes) to their love interest no matter what.

Megaundere characters obsess over their crush to an extreme, putting their love interest on an incredibly high pedestal. They are completly love blind, unable to see any fault in their love interest. They are very agreeable and submissive, to the point that they are willing to give themselves up to their partner like a slave.

Megaundere characters are very easy to manipulate, since they are so loyal to their love interest, making them susceptible to abuse. 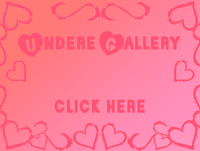