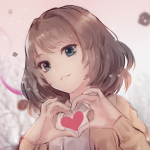 🌺I'm Eira! Yes, that's my real name. Thanks for stopping by my profile page!🌺

I'm just another player who loves all kind of video games, but unfortunately, I don't usually play multiplayer games. I'm a shy Single-player, so I prefer to enjoy the story, world and characters of a game by myself.

If you want to know my personality trait, I can tell you that I am an INFJ-T (Advocate), Enneagram type 9w1 (The Negotiator) and I'm also positioned in the Neutral Good section in The Aligment System. But this is The Dere Wiki! So if I had to choose the one that best defines me as a person, it would be Dandere, even though people say I act more like a Oujodere, Maybe because of my organized and calm personality and how I try to act more mature in front of strangers or acquaintances, but I'm actually very nervous inside. Online I tend to be more Danredere.

My Zodiac Sign is Virgo ♍︎ and my favorite color is Green.

Me and the Dere Types

Not only Deres, but all Japanese archetypes really attract my attention. Whenever I play a video game and I meet a character with a very striking personality, I always wonder if there is at least one Dere that defines them, so I'm always observing all their actions and words to see if I catch a sign of one of these characteristics, that's why I come to this wiki most of the time after completing a game, too add some characters from there.

In my opinion, the Dere part in all these personalities not only refers to a love in terms of a relationship, but it also applies to other types of "love", such as family and friends, that's why I feel really hesitant when adding a character in a list, because many people think that it only works with those who have fallen in love with another character.

Despite this, I try to help in everything I can on this wiki, deleting vandalism and adding characters especially in the game section, which is usually very empty.

Strange as it may seem, I don't usually watch much anime, because I always have a hard time focusing on watching a single serie or anime for so long, I've always preferred video games where you live the stories yourself and chose the best ending for yourself, so as you can see, I don't know almost anybody from the lists that appear on each page.

But I must say that I would love to be able to watch them, because the style, characters and stories seem incredible to me in most of them. Many of the games I've tried also have anime aesthetics, so it's not that I don't like it, it's because I can't follow it, which is a shame. I actually love a lot of things from Japan, and I would love to go there one day to feel the experience.

I would qualify myself as an ♠ Explorer ♠ gamer and kind of an ♦ Achiever ♦ inside the four gamer types of Bartle taxonomy of player types. This means that I love to see every little detail inside and out a game, I take my time to explore every corner in a room, talk to each character, seeing all dialogue and endings possibles. I would be the strange person who would never skip a tutorial or explanation just because it's a part of the game, in fact, I would even seek them just to read it. Even easter eggs, references, theories and glitches are interesting to me. I also try to obtain every collectable in a game, if it's possible.

Sometimes I can tend to lean more to the ♥ Socializer ♥ gamer personality, those who enjoy talking and being kind to other players and even fictional characters in the game. Sometimes I like to replay games to learn more about the characters or to try to imagine myself in the protagonist's place and think of how I would react in different scenarios. If I play online, something that I don't usually do, I most likely would try to help other players as much as possible instead of rival them. As you can see, I don't like playing competitive games at all, but that doesn't mean that I can't appreciate other things about them or see others playing them.

I love games so much that I have even decided that this is the professional career I want to achieve, or at least, my dream is to make or participate in the creation of a video game someday. That's why I'm studying video games and animation in the present. I am very bad at programming though, and I prefer to focus on the artistic part in projects like this.

These are the contributions I have made if you want to see them, although I normally just add a character or fix the lists and galleries on the page:

Retrieved from "https://the-dere-types.fandom.com/wiki/User:Eiralp99?oldid=18607"
Community content is available under CC-BY-SA unless otherwise noted.