An "Usodere" is a character who lie and use tricks to win the heart of their love interest. They cover up the truth to gain something from them and others. [1]

The word was first mentioned in the same title of the eroge visual novel "Usodere! (嘘デレ！)", from 2009.

In this game, the main character transfers to an all girls school despite him being the only male student.

Due to the wealth of his grand-father, every girl is interested in him because they think he will inherit his grand-father's property in the future. All the girls then try to gain the love of the protagonist to the point of making it a competition where they use lies and tricks to be the chosen one, sabotaging the other girls behind the protagonist's back and acting innocent and perfect in front of him with lies.

Some of these girls also hide something about themselves that they only reveal when they have gained a lot of trust with the MC.

They are compulsive liars who want to appeal to others and their love interest by faking their real personality and hiding their feelings. To gain the affection of others, they make decisions and take action based on logical and practical considerations that can gain the acceptance and trust of other people. [2]

You can never trust an usodere, as they will likely find a way to look good with lies. They will make people think that they are sincere and trustworthy because of the way they speak with such confidence. Some can also use dirty tricks to win over the love interest and leave other rivals as the bad guys instead even if this is not really true. [3]

It is also possible that they are lying about something they want to keep a secret because they think that knowing this aspect of them will make people hate them, so they hide it with lies so that they look normal and will be accepted.

Similar to dorodere, they will use lies and good acting to look good in front of others and their love interest. They may even try to get rid of rivals behind the scenes with tricks and deceptions. The difference is that usodere characters really want to win the affection of their love interest, while dorodere characters only act like this at first to hide their true nature and feelings of hatred, which will be destructive once revealed. Contrary to this, an usodere will probably feel more vulnerable, but luckily accepted once revealing the truth. An usodere can be seen as a more sweet version of a dorodere. 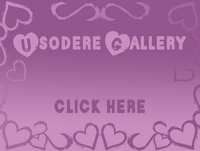