Not to be confused with "Bakadere" or "Deredere".

"Uzadere" is a term for characters who are very loud and annoying.

The term was created on the internet, and has been becoming more popular as of late, being directly referenced in manga and anime like "Himitsu no Reptiles"[1] and "Uzaki-chan wa Asobitai!"

Uzadere characters are characters who are loud and boisterous, annoying those around them. Most do not have any social awareness about their actions, being as noisy as possible in any given situation. Their love interest is usually annoyed by their antics as well, but finds a certain charm in it. Some Uzadere characters, however, consciously choose to be annoying so as to embarrass those around them, including their love interest.

The difference between an Uzadere and a Deredere is that a Deredere is cheerful, but not necessarily annoying. Even if Deredere characters are loud, they know to quiet down during somber situations.

The difference between an Uzadere and a Bakadere is that Uzadere are not intellectually dense, just socially dense.

Uzadere who are annoying on purpose could be considered a version of Hiyakasudere, since they are being annoying in order to tease others. 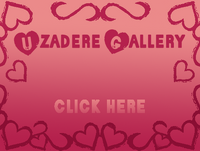