Drunk, happy, uninhibited for the most

A "Yottadere" is a character that is noteworthy for their constant drinking of alcohol.

Yottadere characters are rarely seen without some form of alcohol in their hands (usually it's beer or saké). It is very rare that a yottadere will be sober, and they usually only become sober when they are with their loved one.

Meaning of the Word

Yottadere is derived from "yotta" (った), meaning "drunk" or "intoxicated", which is the past form of "you" (う), and "deredere" (デレデレ), which means "lovey dovey".

There are several types of yottadere, ranging from serious and dedicated to wild and uninhibited.

Almost all of them undergo some personality change when they get drunk or get sober. Officially, they are not separated into different categories. However, they tend to do things when drunk that they end up regretting if they get sober.

Some get very angry and violent when drunk; others just pass out. If they find a partner, they often will stop drinking a lot suddenly. They might also do the contrary, starting to drink more in the first phases of becoming love struck if they don’t understand their feelings towards someone at first or deny it before lowering their drinking habits for the other person. 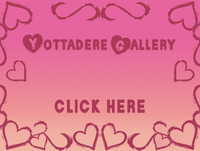